More than 500 bronze coin types from Catharine Lorber’s Coins of the Ptolemaic Empire Vol. I, Part II (Ptolemy I – IV) have been published online to Ptolemaic Coins Online. You can access them by selecting Bronze from the material facet in the browse page: http://numismatics.org/pco/results?q=material_facet%3A%22Bronze%22. 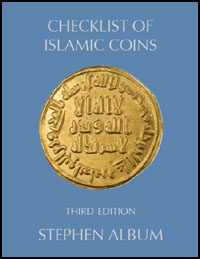 The third edition (2011) of Stephen Album, Checklist of Islamic Coins, has now been made available from his website as a free download. Even for those of us with the hard copy, having it in digital form can be quite useful.

Four new articles by Dr Peter Lewis have been added to our publications archive:

The Coin Hoards of the Roman Empire Project is a joint initiative of the Ashmolean Museum and the Oxford Roman Economy Project. It is the brainchild of Baron Lorne Thyssen-Bornemisza and is funded by the Augustus Foundation. It intends to fill a major lacuna in the digital coverage of coin hoards from antiquity. It aims to collect information about hoards of all coinages in use in the Roman Empire between approximately 30 BC and AD 400. Imperial Coinage forms the main focus of the project, but Iron Age and Roman Provincial coinages in circulation within this period are also included to give a complete picture of the monetary systems of both the West and the East. In 2019 the scope of the Project was extended to include hoards of Roman coins from outside the Empire. The intention of the Project is to provide the foundations for a systematic Empire-wide study of hoarding and to promote the integration of numismatic data into broader research on the Roman Economy.

Visit the Coin Hoards of the Roman Empire site now …

After considerable effort by ANS curator Peter van Alfen, the gold and silver coin types of Philip II of Macedon have been published to PELLA. This typology, based on Georges Le Rider’s 1977 Le monnayage d’argent et d’or de Philippe II frappé en Macédoine de 359 à 294, has been numbered 1-382. Le Rider’s corpus is actually a die study, and the numbering system is based on die combinations rather than types. As such, there are about 2,200 or so die combinations that correspond to the 382 types. These types were given a new numbering scheme, pella.philip_ii.1 to 382, but all of the Le Rider numbers are also URIs in order to establish a concordance between Le Rider and the new scheme so that collections that cataloged their coins with Le Rider numbers can submit their RDF with those URIs or map the Le Rider to the PELLA type number.
Numishare news report

As a component of the National Endowment of the Humanities funded Hellenistic Royal Coinages project, PELLA is an innovative research tool aiming, among other things, to provide a comprehensive typology and catalogue of the coinages struck by the Macedonian kings of the Argead dynasty (c. 700–310 BC), arguably the most influential coinages of the ancient Greek world. Fueled first by indigenous precious metal mines in their native Macedonia, and later by the spoils of their conquests, including the rich treasures of the Persian Empire, the Argeads’ numismatic output was monumental. For centuries after their deaths, coins in the name of Philip II (ruled 359–336 BC) and Alexander the Great (ruled 336–323 BC) continued to be produced by successor kings, civic mints, and imitators from Central Asia to Central Europe. The coinage of the Argeads themselves and that produced in their names has been extensively studied, but to date no comprehensive, easily accessible catalogue of their coinages exists. PELLA is designed to fill that gap, cataloguing the individual coin types of the Argead kings from Alexander I (ruled 498–454 BC), the first of the Macedonian kings to strike coins, down to Philip III Arrhidaeus (ruled 323–317 BC), the last of the titular kings to do so. Included as well as are the numerous posthumous civic and successor coinages struck in the names of the kings.

PELLA is made possible by stable numismatic identifiers and linked open data methodologies established by the Nomisma.org project. Coin type data are made available with an Open Database License. All images and data about physical specimens are copyright of their respective institutions. Please see the Contributors page for further details about individual licenses. The current version of PELLA uses the numbering system and typology originally created and published in Price (1991) with the addition of modifications that greatly enhance the volume’s usefulness as an online resource.

The State Museum of Prehistory Halle (Landesmuseum für Vorgeschichte Halle) is the latest partner to join the Nomisma.org Linked Open Data cloud through the KENOM portal of German civic museums. Over 300 coins have been added to OCRE and CRRO from the State Museum of Prehistory Halle. In total, KENOM has made more than 10,000 coins available into the Nomisma numismatic ecosystem, for every type corpus project published by the American Numismatic Society–including Art of Devastation, to which no one besides the American Numismatic Society has contributed. There are 19 coins from two KENOM-affiliated museums made accessible through Art of Devastation.

The script that harvests LIDO XML from KENOM’s OAI-PMH web service has been updated to make use of findspot metadata. About 150 coins are linked to Geonames URIs as single finds and another 100 are linked to two hoard URIs published by KENOM. These will ultimately link to the Oxford Coin Hoards of the Roman Empire project. The hoards are Schwabhausen and Holzthaleben.

OZeAN: Online Zeitschrift zur Antiken Numismatik, is a new numismatic journal that publishes scientific essays, material templates and reports on novel possibilities for the collection and recording of materials.

The Hieromykes on a new coin type of Dion in the Decapolis and the Stygian riverscape of Southern Syria Achim Lichtenberger, 1-10

Communication and scientific exchange is now taking place digitally and increasingly online. The number of museums and scientific institutions that keep their stocks online is growing daily.

In recent years, a number of new numismatic journals have been established, which are also available online, but they are still pure print media in terms of character. For example, most of the articles lack direct links to national and international projects using Linked Open Data.

Similarly, many publications often miss the integration of 3D graphics and high resolution photos and audio and video documents are often missing. For coin stamp testing, 3D scans are increasingly used to allow even to enlarge details and viewed from all sides. Minting technology experiments can be displayed in online media for better understanding with short films. The sound documents can, for example, illustrate the different sounds of cast and coins. 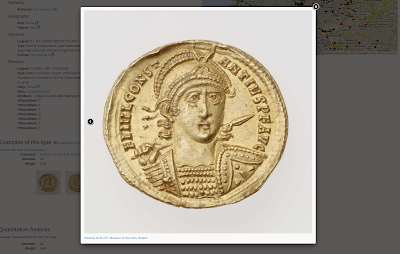 The Museum of Fine Arts, Boston is the newest entrant into the Nomisma.org Linked Open Data cloud, providing data for more than 1,600 Roman Republican and Imperial coins to Coinage of the Roman Republic Online and Online Coins of the Roman Empire. The MFA’s collection is particularly strong with respect to late Roman gold pieces, many of which represent the sole specimen available for that typology in OCRE.

Of these coins, roughly 1,400 are Imperial and a little over 200 are from the Republican period. The MFA’s terms of service are linked from the datasets page in Nomisma.org itself and the contributors’ pages in OCRE and CRRO.

Data for these coins were provided by Laure Marest, Cornelius and Emily Vermeule Assistant Curator of Greek and Roman Art, and processed through OpenRefine to reconcile against the APIs available in both projects. The resulting CSV was transformed into RDF by a script I wrote and uploaded here and ingested into Nomisma’s SPARQL endpoint.

The collection of over 12,000 Byzantine coins at Dumbarton Oaks is one of the largest and most comprehensive in the world. The majority of these specimens were catalogued in six print volumes:

With ongoing acquisitions of objects, many of the coins that have entered the collection after the release of the print catalogues have remained unpublished. This online catalogue first presents these more recent specimens, and eventually will provide online access to the full collection.

In addition to Byzantine coins, these acquisitions include specimens issued by Byzantium’s neighbours, including Arab-Byzantine and Persian imitations, Ostrogothic and Vandal coins, and others.