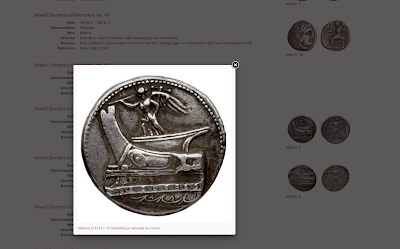 One hundred twenty-six coins from the Bibliothèque nationale de France, recently cataloged by Julien Olivier, have been incorporated into the newly-released Antigonid Coins Online (AGCO), which so far includes the coinage of Demetrius Poliorcetes. Roughly a dozen of these coins were already accessible through AGCO upon its launch since a handful of the coins of Demetrius are cross-linked with posthumous issues in the name of Alexander the Great in PELLA (related specimens are displayed in Numishare when they link directly to a type URI or implied to be the same via skos:exactMatch).